Today, the Tarot is far and away the most popular tool for spiritual introspection in the West. 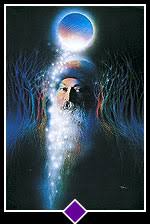